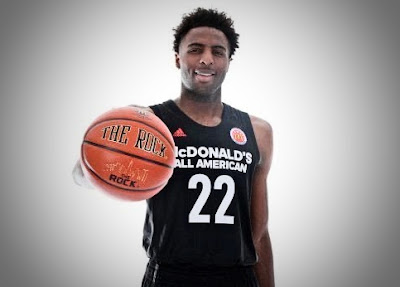 The NBA Draft can be screwy proposition: a volatile mix of potential stars, role players and cautionary tales. And while the top of the totem pole is where the major media casts its blinding beam, the descending order with its gathering chaos and uncertainty has no shortage of other storylines.

Enter Mitchell Robinson, a former 5-star prospect who came up with the dubious strategy of dropping out of college before his freshman year actually began, hence guaranteeing himself plenty of alone time in which to “concentrate on my training.”

There may be a consolation prize for a player once regarded as a lottery lock: whispers of a promise from the Los Angeles Lakers to take Robinson with their No. 25 pick, first from NBADraft.net and more recently from the New York Times’ Adam Zagoria.

But these kind of agreements—when they actually exist apart from rumors—can be fluid and uncertain things, especially outside the lottery as the selection process devolves into a mad scramble.

Growing up in Pensacola, Florida, Robinson wasn’t much for hoops. But a seven-inch growth spurt in eighth grade persuaded him of obvious possibilities. He entered Pine Forest High School at 6’9” and climbing. Between growing pains, academic problems and the mastering of basketball fundamentals, the sapling center struggled to make an immediate impact. But by summer of his sophomore year, Robinson had sprouted yet another two inches and was tearing up the AAU circuit on teams like Alabama Challenge and New Orleans Elite.

Concurrently, his mother, Kesha Hall, moved to New Orleans. Robinson followed, enrolling briefly at Landry-Walker High before changing his mind and heading back to Pensacola and the grandmother who primarily raised him. A few weeks later he did another 180, this after his mom and his sisters resettled in the parish of Chalmette near the Mississippi River—an area still struggling to rebound from the massive destruction of Katrina a decade earlier. It was the dawning of a new school year and the Chalmette Owls had landed a giant.

Robinson arrived in the bayou ranked No. 33 nationally with interest from Alabama, Auburn, Florida State, DePaul, LSU, Texas A&M, UMASS and Tulane. A summertime visit with his mom to Texas left a strong impression—they liked the College Station campus as well as assistant coach Rick Stansbury, a hard charging recruiter with a litany of prior stops including 14 years as head coach of Mississippi State.

The budding rim-runner announced his commitment to the Aggies at the beginning of October, 2015—two full years before he was due to begin college.

As a high school junior, Robinson averaged 19.6 points, 12.5 boards and an outrageous 7.9 blocks per game. He also led Chalmette to the second round of the state playoffs—the last time the school managed even one playoff win has been nearly two decades earlier.

Now a seven-footer, Robinson was amassing a growing circle of advisors, mentors and friends. There’s nothing like the hint of stardom to pad out one’s retinue, especially when you’re the new kid in a new town and life is coming at you fast. But nobody had Robinson’s ear quite like his “godfather” Shammond Williams, a standout point guard at North Carolina who went on to a journeyman career with seven NBA teams and numerous overseas stops before finally hanging up his kicks for good in 2011. He joined Tulane’s coaching staff as an assistant a couple years later.

Robinson’s senior year saw a continued trajectory punctuated by 25.7 points, 12.6 rebounds, 6 blocks and 1.8 steals per game. A heady combustion of length and raw athleticism spoke to the potential for life beyond school sports, given the NBA’s hunger for shape-shifting big men who can thread the needle between pure size and multi-positional versatility.

One thing he didn’t yet possess was any long distance aplomb—the paltry 28 percent of three-pointers made in 12th grade was only slightly better than the year before. But this was a skillset that might reasonably be honed at a good college program. Meanwhile, his verbal commitment to the Aggies had not dissuaded other suitors.

The level of abject greed at the highest levels of college recruitment has been a constant in modern sports history despite periodic soul-searching efforts for NCAA atonement married to ever-expanding rules and procedures.

A notably long FBI investigation into over 20 basketball programs listed Robinson among players who received favors from ASM Sports president Andy Miller and his associate Christian Dawkins. Michigan State and Villanova were among schools that had dined Robinson and his family. But the decision to never actually play in college rendered possible recruiting violations specific to his case moot.

The young sky walker capped his high school career with scintillating appearances at Jordan’s Classic and MacDonald’s All-American games in 2017. He was also invited to USA Basketball camp tryouts for the U19 squad where he measured out at 7’1” with a 7’4” wingspan, weighing 233 pounds.

Now the No. 1 center prospect in the nation, according to 247Sports, Robinson had been anointed a lottery draft pick before his one-and-done year had even commenced.

Stansbury had landed a job as head coach at Western Kentucky University in 2016 and was working hard to get Robinson to renounce the Aggies and commit to the Hilltoppers. It was a curious choice as Conference USA isn’t a huge calling card. But Shammond Williams soon joined Stansbury’s staff and that seemed to seal the deal. At least momentarily.

At a presser on June 20, per Courier Journal video, Stansbury talked about the challenge of coaching a mixed bag of mostly freshman unknowns. He also claimed a kingmaker role in regards to Robinson, the biggest recruiting coup for Bowling Green in years.

Two weeks later, “the guy” (Williams), abruptly resigned. In fact, he was one of three WKU assistants to leave during a one-year period.

Things at the Camp Robinson were quickly unraveling. Other potential school destinations were bandied about. But Stansbury temporarily staunched the bleeding, reminding his teen dream of the binding National Letter of Intent he had signed.

Robinson dutifully arrived on campus for summer school sessions on July 10. Over a two-and-a-half-week period he took classes and participated in basketball workouts. A team trip to Costa Rica was just days away.

On July 27, after Robinson didn’t show up for practice, team personnel went to check on him. All they found was an empty dorm room. Calls to the family went unreturned. The missing big man had first returned to Louisiana and then headed further east to continue his soul searching in Pensacola.

The school issued a statement and suspended the would-be freshman for violating team rules. Stansbury was eventually able to reach his wayward prodigy by phone, releasing him from his scholarship.

In August, Robinson visited Kansas, LSU and New Orleans. But the idea of red-shirting for a year didn’t quite fit the game plan. He returned to WKU and a momentarily relieved coach and administration.

But the agonized twists and turns had not yet run their course. Robinson left school again in early September. A week later he sealed the divide during a conversation with Scout.com’s Evan Daniels.

And so began an eight month grind toward draft day. During the week, Robinson would work out in Dallas, Texas with trainer Marcell Scott. Most weekends he’d return to New Orleans, often playing nighttime pickup games with friends at his old high school gym.

“It is tough,” Robinson said per Rod Walker of the NewOrleans Advocate. “I'm working out, and nobody is able to see me like they are seeing everybody else. So I have to really make sure that I am working out too. I can't afford to take days off.”

He packed on some muscle and worked on ball-handling and face-up moves. And couldn’t help but wonder about a school year that happened without him as Bowling Green’s ragtag collection of players made it all the way to the National Invitation Tournament before losing to Utah at Madison Square Garden.

The former phenom investigated playing in the G League to get extra exposure and experience. But according to ESPN’s Jonathan Givony, Robinson’s convoluted college enrollment saga prohibited it.

Making matters even worse, NCAA rules don’t allow NBA teams to scout players outside of sanctioned games and events until after April 25. Robinson would have to soldier on in anonymity, aiming for the Basketball Combine in Chicago, an annual rite of passage that draws draft hopefuls, scouts, team executives, coaches and media. It’s a chance to be seen, to scrimmage and to be measured, to be evaluated and interviewed. The combine is a three-day clearinghouse of basketball intelligence and data, and the player who had been the subject of so much mystery would finally be able to step back into the limelight.

But after hiring an agent in in early May—Raymond Brothers from IAM Sports and Entertainment—Robinson pulled one more U-turn in a years-long slew of them. On the eve of the combine, Robinson dropped-out-of-the-very-same-combine. You say you know but you don’t know. Maybe nobody does.

There’s ample precedent for exiting this prestigious yearly event. Sometimes a player is so high up the draft ladder that there’s nothing to be gained and plenty to lose. Or, there could be a medical issue or some other type of unwanted exposure.

But for a guy hovering wildly between the middle of the first round and somewhere in the nether regions of unguaranteed contracts? Maybe Robinson and his agent really do have a card up their sleeves—like a commitment from the Lakers. Remember that, from 1,500 words ago?

Yes, a promise can mean many things, from hope to assurance and from pledge to potential.

Meanwhile, the Lakers have needs across the board, including backcourt depth and true shooting ability. Maryland wing Kevin Huerter checks off those key boxes and recently had a great workout in Los Angeles. He then bailed from his next date with the Utah Jazz (21st pick) and is now rumored to have a promise from a team drafting in the first round.

Mere coincidence? Well sure, probably. At this point, all roads intersect with certain common points. Huerter’s stock soared after a great combine while Robinson chose a different angle, eventually showing off his moves at The Sports Academy in Thousand Oaks, CA where multiple teams sent representatives to observe.

Despite his serpentine journey, Robinson does have a personal motivation to succeed and it’s a familiar story for professional athletes.

“My grandmother,” Robinson explained to USA Today’s Jason Jordan. “She lives in Pensacola, Florida, and she was the one that raised me. I want to be able to move her away from there and have her come stay with me wherever I end up. That’s what I think about every time I step on the court and it keeps me grinding.”

The Lakers have churned through a lot of centers over the past five seasons (Lopez, Zubac, Robinson, Frye, Mosgov, Black, Hibbert, Sacre, Hill, Gasol and Kaman) and that’s not counting power forwards masquerading as pivots who have at times been more effective than their larger brethren, or offseason experiments such as a giant pterodactyl who ultimately flamed out of the G-League.

Is Mitchell Robinson the solution or is he destined to be a forgotten footnote in a never ending conversation? And how do narratives like this measure up against the inescapable fact that teams eyeball dozens and dozens of young hopefuls this time of year as part of a calculated process designed to help select the best option left on the board—regardless of position—when the clock starts ticking?

Maybe the kid from Pensacola can be that elusive unicorn, even with all his contradictions and question marks. Because the NBA is still a league where the combination of high risk and high reward can be an irresistible roll of the dice.

Somewhere there’s a place where grinding leads through an impossibly narrow path, where one’s personal journey eschews any larger structure, where siren voices beckon toward the treacherous shoals and where redemption waits on the opposite side. In the early evening hours of June 21, 2018, the next chapter in the life of Mitchell Robinson begins.