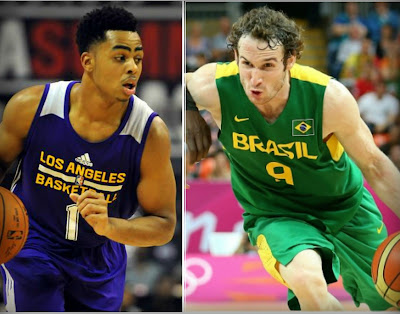 Coming from different places in time and space, two rookies will converge at the same point this fall.

D’Angelo Russell is the Los Angeles Lakers’ prized No. 2 draft pick while Marcelo "Marcelinho" Huertas will make his NBA debut at the ripe old age of 32.

News of Huertas being signed by L.A. caused a ripple but certainly not a roar.

Perhaps it’s because the Brazilian point guard is relatively unknown in this country, or maybe it's just the dog days of late summer.

Then again, Russell can sell copy for days by simply tweeting about Tracy McGrady.

It’s understandable—the precocious playmaker is 19 years old and holds the promise of future fame and fortune. His star-crossed storyline hits the required notes of a journey yet traveled.

Huertas, meanwhile, has long been regarded as the one of the best non-NBA point guards in the universe. But that universe is “over there” and the 6’3” Euroleague star is closer to the end of his career than the beginning.

Their parallel paths may have seemed worlds apart but now they have been placed on an intersecting course that could provide plenty of media fodder for the basketball season that lies just ahead.

L.A.’s success rate with lead guards has been spotty in recent years. The three-year contract with future Hall-of-Famer Steve Nash produced just 60 games as he limped to an ignominious ending demanded by the gods of time.

Last season’s Jeremy Lin experiment fizzled out and before that, Steve Blake and Jordan Farmar spent as much time on the trainer’s table as did Nash. Chris Duhon and Darius Morris existed on the roster at some particular point while Kendall Marshall was plucked from D-League obscurity to average 8.8 assists through 54 games during the 2013-14 season.

But while he tied with John Wall for 2nd on the APG leaderboard that season, Marshall wasn’t invited back by the Purple and Gold.

The brightest spot in all of this was Jordan Clarkson—last year’s No. 46 draft pick parlayed scrub minutes into a Cinderella success story, including All-Rookie First Team honors. His speed, athleticism and work ethic probably should have earned the 6’5” guard a chance to build on his success at the point. But L.A. pulled a draft night stunner when they chose Russell as the second overall pick, passing over Jahlil Okafor—perhaps the most potent offensive pivot of a generation.

Clarkson’s trajectory now shifts to the shooting guard slot where he may or may not succeed alongside Russell—imagine two souped-up street racers being asked by Lakers coach Byron Scott to proceed at a leisurely half-court pace while their internal RPMs redline frantically.

But as interesting as the Russell/Clarkson dynamic could be, the acquisition of Huertas serves as an unexpected late summer hip check. A wild card just entered the race and his credentials, though continents removed, are well established.

Born in Sao Paulo, Huertas grew up playing in local youth clubs before transferring to Coppell High in Texas for his senior year. The foreign exchange student landed a varsity spot at the small suburban school by unleashing a 70-foot bounce pass during a pick-up game.

Once his 2000-2001 season ended, Huertas returned to Brazil where he honed his skills at the Academy of South America before turning pro. Three years later he jumped the Atlantic to the Spanish ACB league, playing for DKV Joventut for three seasons and Bibao Basket for one. He spent the following year in the Italian league before returning to ACB with Saski Baskonia. For the past four years he has played for FC Barcelona—the powerhouse Spanish team that spawned both Pau and Marc Gasol.

The point guard is also a longtime member of the senior men’s Brazilian national team, playing in Olympic, FIBA and Pan American competition and winning several gold medals along the way. The international games have allowed him the experience of matching up against Team USA stars like Jason Kidd, Dwyane Wade, Chris Paul, Derrick Rose, Stephen Curry and a guy named Kobe Bryant. 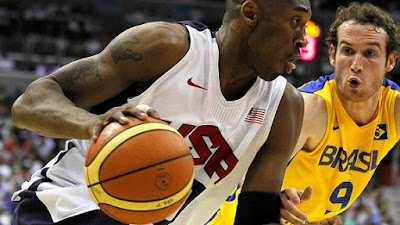 There have been lucrative Euro contracts and exorbitant buyout clauses, precluding the NBA dream. But with his most recent agreement having expired, Huertas was finally be able to cross one more thing off his bucket list.

The middle-aged rookie will be the first NBA player ever produced by Coppell High and it took just 14 years to get there.

Meanwhile, Russell was a prep sensation and played his one-and-done freshman year at Ohio State, leading the Buckeyes to the NCAA 2015 Tournament before losing in the round of 32 to Arizona.

But despite the vast differences in age and experience, the two NBA newbies also share common attributes.

Russell is heralded for possessing an uncanny court vision at a tender age and Huertas has been similarly celebrated for years. The teenager fires ridiculous wrap-around passes that seem to defy the laws of physics, while Marcelinho has been dealing spectacular dimes ever since that long-ago 70-footer.

Neither is an elite defender—Russell lacks strength and is slow getting around ball screens while Huertas doesn’t have great lateral mobility and is also relatively ineffective combatting screens. Each will benefit from being backstopped on the defensive end by L.A.’s biggest free agent acquisition this summer, man-mountain Roy Hibbert.

There are also important differences. Russell is a superior rebounder and more complete shooter whereas Huertas’ offense is streaky, featuring a funky-looking set shot and a one-legged runner.

One has already peaked while the other is just getting started. During an interview with Yahoo’s Adrian Wojnarowski, Huertas spoke about a potential secondary role in the NBA at this late point in his career, mentoring young players and assisting veterans.

“If you look at NBA rosters, there are unbelievable starting point guards, but maybe not as many guys who can come off the bench able to run the team, score the ball , as well as being able to be a leader for young players,” Huertas said. “Those are things I know I’ll be able to bring with me.”

But despite his expressed willingness to play a backup role, it’s doubtful the Lakers front office is viewing their overseas acquisition as mere insurance or an afterthought.

After all, if there is any chance for Bryant to experience one more playoff run, it will take more than the developmental curve of rookies and sophomores like Russell, Clarkson and Julius Randle. It will mean a heavy reliance on Hibbert, the steadiness of journeyman Brandon Bass and the scoring punch of reigning Sixth Man Lou Williams.

And you can now add one of the world’s great playmakers to the mix—a guy who dropped 13 dimes on Bryant and Team USA during an Olympic exhibition. But this time he’ll be on the Mamba’s side.

As for those wondering if an overseas point guard can succeed in Scott’s hybrid Princeton offense, not to worry—both the Brazilian national team and FC Barcelona feature traditional systems, including liberal doses of the Flex offense with its heavy reliance on passing, cuts and ball-reversals. Huertas has also run a lot of Horns sets in Spain, something the Lakers dabbled with last season.

None of this should diminish Russell’s potential—the immensely talented lottery pick represents the potential next face of the franchise. But it is also not fair to place outsized expectations upon a kid who will often err while reaching for greatness. His 175-to-102 assists-to-turnover ratio ranked him 175th among other college guards last season, and his 5.2 turnovers per game during Las Vegas Summer League was an inauspicious introduction to the NBA—especially stacked against an average of only 3.2 assists.

The princeling’s greatness will come in time, but he has to learn not to drink the entire ocean in one gulp. That said, the future belongs to the new generation and the Lakers front office has made no pretenses about their forward-looking rebuild.

But parallel lines don’t always have to go peacefully into the night. Maybe Huertas is a complementary second fiddle and maybe he gives a young kid a run for his money. Maybe he rips world-class passes to Bryant’s sweet spots all night long or maybe they both hobble off to the retirement farm before the season’s half over.

If recent years have proved anything for the Lakers, it’s that nothing seems to go by plan.

The point guard position can be viewed along two different lines of sight, measured by the angles of inclination between those lines.

Russell could grab the gauntlet and achieve his instant success. Or maybe a Euro legend throws a full-court skip pass to a swan song superstar, and all bets are off—across the basketball universe.